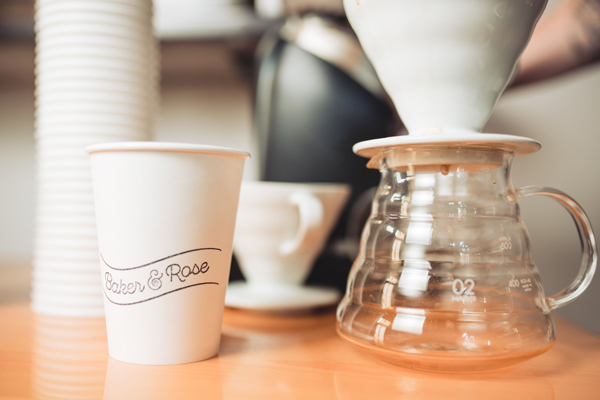 Just through the front entrance of the Emporium Building is a two-story room outlined with worn red brick. The ceiling consists of stained wooden boards that run parallel across the ceiling, just below a glass skylight.
Ironically, this rustic space is the perfect backdrop for one of South Bend’s newest restaurants. Perhaps the only thing more aesthetically pleasing than the room is the food its owners serve.
Kevin and Colleen Lawler are the sibling duo who officially opened Baker & Rose in May, a breakfast, lunch and occasional weekend brunch café just off of the St. Joseph River at 121 S. Niles Ave. Both originate from the Pacific Northwest and decided to bring a touch of the Portland area food scene to the Midwest. 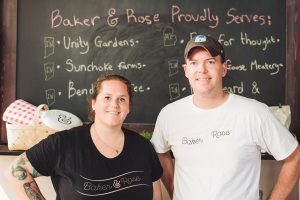 “It seems like people like everything,” Colleen says. “They keep coming back and want to try something new because they trust that we’re going to give them something that is awesome, and because they’ve had that experience already, they’re willing to get away from their normal order and try something new.”
A few of Baker & Rose’s popular dishes include the ricotta toast and the soft scrambled eggs.
The ricotta toast is eye-popping. It’s a slice of rosemary bread and ricotta smeared with a thick layer of blueberry-lavender jam. Sprinkled on top are pistachios and a drizzle of Unity Gardens’ Honey.
This purple treat was the first menu item posted on Baker & Rose’s Instagram account.
“OMG it could not look any better than that,” commented one long-time South Bend-area resident after seeing it on the Baker & Rose Instagram feed.
The soft scrambled eggs, on the other hand, are a savory dish. Freshly scrambled eggs are placed on top of bright-pink pieces of smoked salmon, with chive oil drizzled all over.
When the dish was posted on Instagram in July, the first comment was “Yum! So good.”
It was through posts like these that Baker & Rose attracted most of its customers when it first opened. 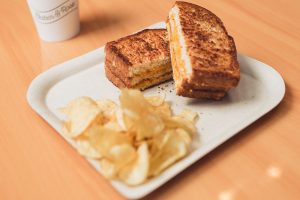 “Within our first few days of opening, we asked people how they heard about us,” Colleen says. “More often than not, it was Instagram. Sometimes Facebook, but mostly Instagram. People are following along and they’re seeing stuff pop up and they’re seeing friends post after coming here.”
Other common breakfast items on their menu include granola, pancakes and an egg sandwich. Common lunch items include grilled cheese sandwiches, meat sandwiches and a seasonal side salad.
While most customers seem to enjoy their menu, Colleen and Kevin refuse to become complacent. They never seem to share the same items on social media more than once, and they are always changing their menu in order to incorporate seasonal vegetables and the freshest ingredients.
The duo reprints their menus daily, which allows them to tweak an item as they see fit and add or replace it. That doesn’t mean they have a brand new selection every day or every week, but it does allow Baker & Rose to perpetually improve and adapt.
“If an ingredient cycles out of season, it’s a really easy adjustment for us,” Kevin says.
In the fall, they say customers can expect a menu item or two to incorporate Brussels sprouts and butternut squash, but, for the most part, Colleen and Kevin aren’t sure what’s next.
“We just don’t know yet,” Colleen says. “That’s kind of the fun part. We get to collaborate and enjoy our own experiences experimenting. … It’s more like workshopping with [various ingredients] for days or weeks at a time, and then once when we get it right, we put it on the menu.”
Even though neither grew up here, they both hold South Bend dear to their hearts — Kevin in particular.
He is 35 and first experienced South Bend in 2011 when he visited to help Pete Buttigieg with the last few months of his first mayoral campaign.
“My title was GOTV director — Get Out the Vote — so you’ve got in the last four or five days of the campaign, you’re going to knock on thousands of doors with hundreds of volunteers,” Kevin says. “I helped organize that effort. He and I have mutual friends, and I thought it would be fun to work with someone roughly my age.” 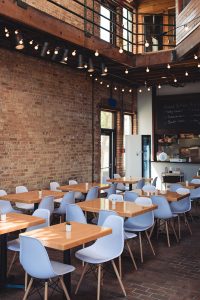 After the campaign, Kevin left South Bend only to return a few years later. He noticed how much the city had grown and was looking for an opportunity to start something like Baker & Rose in an up-and-coming community like South Bend, especially if he could do it with his sister.
“It’s something we had talked about for a while,” Kevin says. “Colleen has experience in food service and managing coffee shops and restaurants. I used to have a bagel business, but I wanted to do something with a more diverse menu. We were looking for the right time and the right space. When it came along, we decided to go for it.”
“Going for it” includes roughly 10 tables and a 120-square foot kitchen, but the duo has already figured out how to wisely use this picturesque, yet quaint space.
Open from 7 a.m to 3 p.m. Monday through Friday and occassionally on weekends, the restaurant serves breakfast and lunch every day. For now, brunch is only offered on certain, pre-scheduled Saturdays which they announce on their website and social media accounts. Customers can then go online to reserve a certain time slot with a $10 deposit, starting at 9:30 until 11:30 a.m.
“We pick a date that works for us, announce that we have brunch and sort of cycle through, so once people come in, place their orders and get settled, that fills the room,” Kevin says. “Then the second seating comes in right behind them, and we are able to get both groups started. After that the second seating was full. As they start clearing out, we’ll do another two waves of reservations.”
The restaurant is constantly garnering extra exposure due to the traffic from visiting Baker & Rose’s neighbors, such as the Emporium restaurant, Luxe Wagon and A.R. Drew Art.
Colleen, 33, has only lived in South Bend for a few months, but says that she has enjoyed her time here.
“There’s a lot of cool, young people here that have been really kind and welcoming to me,” she says.
Colleen she wants to provide South Bend with more food-related experiences. Recently, Baker & Rose started hosting picnics, where customers can purchase a basket filled with food and then take it across Jefferson Boulevard to Howard Park.
This is the type of event experience the sibling duo could see becoming a big draw, especially once South Bend’s Venues, Parks & Arts department finishes renovating Howard Park next year.
“It still feels like South Bend is still just at the beginning of its growing process,” Colleen says. “If it’s not raining in Portland, then the parks are full anywhere you go. Here you just don’t see that, but I think it’s coming, like a lot of other things.
“What we’re doing with the menu is something a lot of people don’t see, not just in South Bend but in the Midwest. It seems like South Bend is headed in a really positive direction.” 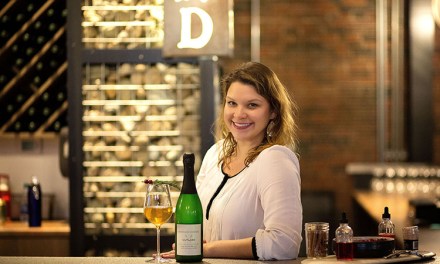 Behind the bar with Maureen Bauer 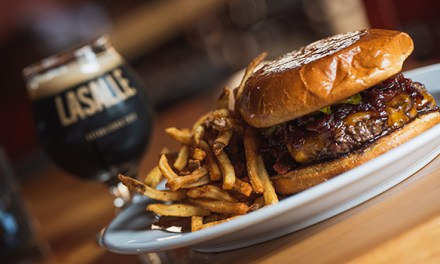 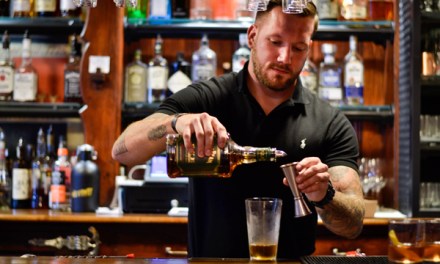 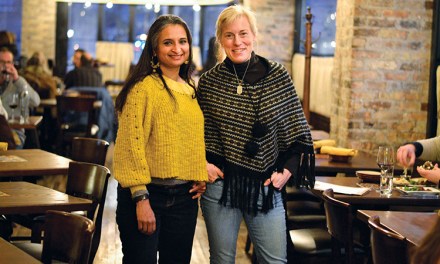